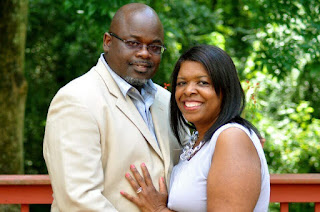 What kind of romantic love do you create when you’ve been shaped by community love? What turns you on about a man or woman, when the community has turned out for you? Is attraction simply a matter of individual biology and natural instinct, or does the community’s touch help you interpret the intimate touch?


Gerry is an Assistant Professor at the Clark Atlanta University (CAU) Whitney M. Young School of Social Work and Owner of PES Consulting. Celeste is an author and Instructor in Sociology and Criminal Justice @ CAU. They've been married for 24 years.

Gerry:
"When I was in Jr. High school there was a major race riot. Some white boys tried to jump me. My brothers weren’t having it. My neighborhood wasn’t havin’ it. The next thing I know, there are police dogs and everything. I was in the Malcolm X movement, and just after high school my second home was the Uhuru House in Oakland. Though my dad and mom divorced, both were strong in my life, and everyone – especially the men - in the neighborhood had a hand in raising me. They stood up for me and taught me to stand up for myself. Still today, I’m still best friends with Bookie and other brothers that I grew up with back in Richmond, California"

Celeste:
"Raised in the projects of San Francisco, I had 7 mothers – my mother and her best friends. These women came from the projects too, and regardless of their hardship and struggle, they made sure I was taken care of. They saw to it that no harm came my way, that I was fed, that I got an education to hold on to my dreams. They also were on me to make sure I stayed focused."

They could never have known that their respective communities were preparing them to write and sing a life-long love song. When asked what was his attraction to Celeste, Gerry said, "outside of that beautiful hair and smile, was her discipline. When we were in college, she insisted that we go study in the library before we could go out on a date. That’s the kind of discipline I needed to get me through college. She never wrote my papers; instead, she inspired me to do my best."

Celeste revealed the four things that made Gerry the man for her - “his big steps, his chocolate colored skin, his commitment to family, and the way he stood up for what he believed in and for others who had been treated unjustly." She remembers him on his campus @ California State Univ -Hayward, advocating for the Black History Program. “He was always on the front lines,” she says.

Gerry said, the people I was trying to get to come to speak, were her professors at San Francisco State – Asa Hilliard, Wade Nobles, Angela Davis and more. She was being taught by the heavy weights! Everything lined up, and Gerry remembers: “She was such a 'perfect spirit.'" “I was waiting for the catch.”

Over 29 years later, he's still waiting, and has decided to enjoy the gift that he still calls the “Perfect Spirit.” She still calls him "Superman."

Superman and the Perfect Spirit - their love cup hath runneth over - showering us with three other perfect spirits: Imani, 23, Nia 19, and Jaya, 15. "Together they are faith, purpose, and victory," says proud Papa. 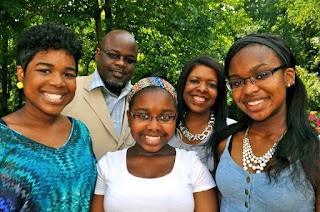 While Celeste and Gerry are accomplished writers and educators, and business owners, they point to their community work with most pride.

Celeste says, "we’ve created a 'Healing House'  where anyone feels welcome. I love helping people focus and stay at peace with the confidence that they are doing the right thing, and that their investment in their family is right."

Her passion is Black women’s power and influence in ways that function in the Black community. In her own words, “I’m interested in the agency and resiliency of the Black woman."

Now, you know Jo Ellen Moon, and the rest of her mothers are smiling at their handy-work.

Gary points to his initiating the fatherhood movement in GA after the Million Man March. He said Georgia was targeting Black Men with felony convictions for child support issues. I started educating men in barbershops. I was traveling all over the place talking about Black fathers and the Black Family. Mr. Hunt – along with those other community men who helped raise Gerry back in his old neighborhood - are smiling at what their touch has produced.

Even today, Celeste likens Gerry to a Black Onyx and still loves his poetry, especially “A Tribute to the Black Woman, and her favorite his I Stand as A Black Man." “When he does that poem, I sit just waiting...” He, in turns, likens her to brown caramel for both the color and the flavor. “Pure sweetness,” he says. About the poetry, he adds, “She turned me into a poet.”

So while the nature vs. nurture debate still rages in some circles, here there is no question: community love birthed sweet romantic love. That love is reborn with each new act of community love.

Come. Bring your love - romantic and/or community - to celebrate with Gerry and Celeste at our 5th Annual Black Love Dinner Celebration.

“Let The Circle Be Unbroken.”

By Wekesa Madzimoyo February 06, 2020
I Love AYA. Parents, teachers, students here's another FREE AYA Educational Institute installment for your BHM curriculum stash. Often overlooked as part of Black history and BHM education are our people's organizations and movements. Too often this month is filled with instruction about “The first Black to do this, and the first one to do that." In addition to being too "prove-it-to-white-people focused, it is also too focused on individuals. Today we take a different path. Using our call and response tradition, we focus on the impact of our people's movements had on music, and in turn the effect of our music to invigorate the Black Power movements in its various forms. We're a Winner: O ur lesson started with "We're a Winner" by Curtis Mayfield. Me: Not only does Curtis Mayfield encourage and affirm Black people he also exhorts the required level of commitment needed to win. Assignment: "Listen
1 comment
Read more

By Wekesa Madzimoyo August 17, 2014
Pre-launch. Please repost!  AYA is looking for grandparent-aged Africans to be apart of our Guardian Elders program and our Guardian Force. We surround our part-time, full-time, weekend academy students (youth and adults) from 6th grade through college with a Guardian force. We need you.  This may well be the most rewarding volunteer work that you ever do. Look for more info. In the meantime, if you're interested in learning more or attending a Guardian Elder informational webinar/phone conference, fill out the short interest form here: http://www.ayanetwork.com/macform/view.php?id=14507 Here's a link to a teaser. I'll have to tell the story a bit differently, but for now (pre-launch) you may get the picture: http://www.npr.org/blogs/krulwich/2013/12/16/251672253/why-we-need-grandpas-and-grandmas-part-1 . Join AYA's Guardian Elder force because an elephants head is no load for a child.  We need you! Flexible. Simple. Powerful. You can participate
Post a Comment
Read more

The Truth About the Confederacy in the United States (FULL Version)